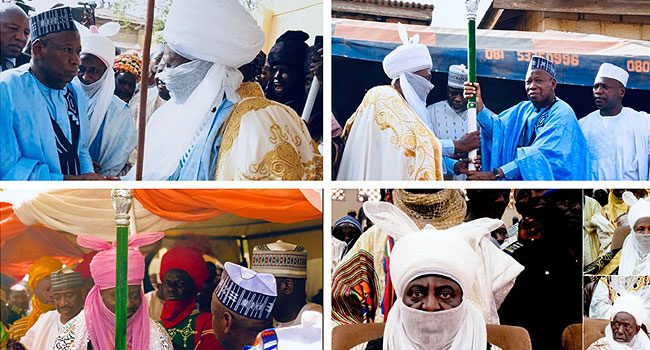 Governor Abdullahi Ganduje of Kano state, has presented the staff of office to the four new Emirs.

The exercise follows the recent split of the Kano Emirate into five.

The Governor proceeded to present the staff against the orders of a court, restraining him from implementing the breakup of the Emirate.

In a statement by his chief secretary, Abba Anwar, said the governor presented the instrument to Aminu Ado-Bayero, the eldest son of the late emir of Kano, as the emir of Bichi.

“This Staff of Office represents dedication and commitment to serve your subjects in the areas of security, health care delivery system, education and environment among others,” said the governor while congratulating the new first class traditional rulers.

“We, as a government, are always ready to work with you hand in hand for the growth and development of our state in particular and the nation in general.

“You should place greater priority on education, health and the security of your domains. As a government, we will always respond positively to your people-oriented yearnings and aspirations.

“As leaders who are closer to your subjects, you should join hand with government and other security agencies to make sure that security is not only improved but maintained.

“Efforts towards strengthening community policing, as practised globally, should form part of your commitment. Ours is to, together, ensure that global best practices are observed.”

The Kano State House of Assembly had on May 8, passed the bill for the creation of the four additional first class Emirates.

This was after approval of the amendment of the local government and chieftaincy affairs law by the lawmakers.

In a motion presented to the House by the Majority Leader Baffa Babba, the House unanimously agreed that creation of more Emirates will assist in job creation, dispute, and community conflict resolutions among others.

Upon the passage of the bill by the Kano Assembly, Governor Ganduje assented and went on to present letters of appointment to four new first-class Emirs in the state.

The governor presented the letters on Saturday during a ceremony held at the state capital.

Ganduje during the presentation said the creation of an additional four Emirates will make the Kano traditional system more efficient.

He however, denied the claims that the creation of additional Emirates in the state was done to settle personal scores with anyone.

Contrary to the allegations, Ganduje explained that the additional Emirates were created to make the traditional institution in the state more effective.

He went further to declare his respect for the Emir of Kano, Muhammadu Sanusi II who prior to now was the sovereign Emir of Kano.

He, however, noted that the traditional ruler was answerable to his Local Government Chairman, as enshrined in the Constitution.