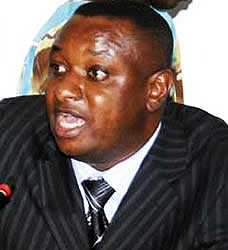 The absence of the prosecuting counsel, Mr Festus Keyamo, on Wednesday stalled the trial of former Aviation Minister, Femi Fani-Kayode, on allegations of laundering about a hundred million Naira.

Justice Rita Ofili-Ajumogobia of the Federal High Court Lagos was dissatisfied that Mr Keyamo, who was said to be ill, failed to give the court a prior notification of his absence.

The judge said “courtesy” demanded that Mr Keyamo phoned the court to save the time of the court and defence lawyers some of whom had come from outside Lagos especially as the matter had been scheduled since March 19 for trial to continue today.

A counsel, Mr Vitalis Ahaotu, from Mr Keyamo’s law firm was in court, but he could not proceed with the matter, especially as the court had earlier ruled that only Mr Keyamo was competent to prosecute the case since he was the one who was given the fiat by the Attorney-General of the Federation.

A former President of the Nigerian Bar Association, Mr Wole Olanipekun, who was also in court told the judge that he had joined the defence and that from the next proceedings, he would be leading the team defending Mr Fani-Kayode.

Mr Olanipekun had also taken over from Mr Ifedayo Adedipe, who will remain a part of the defence team.

Justice Ofili-Ajumogobia adjourned the matter till May 16 and 17 for continuation of trial.