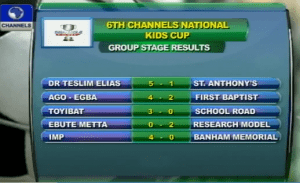 The sixth edition of the Channels National Kids Cup started on Thursday at the Agege Stadium in Lagos with 8 matches played.

In Group C, Toybat secured their first win as they were victorious in their encounter over School Road from Abia State, 3-0.

There was action in Group D as well with Lagos State representatives, Ebute Metta Primary School losing to Research Model Primary School Kaduna by 2 goals to nil. It was a massive win for Eunifrance Memorial, who got the better of their counterparts from Ekiti, Irepodun 5-0.

The last match for the day was a Group C match between Nana Primary School, Delta State and 12 Apostles Primary School from Ebonyi State and it ended in a 4-1 thrashing of the boys from the East.

More group matches would be played on Friday.

What Now For Liverpool After Ending Premier League Title Drought?

Google Says It Will Pay Publishers For News