Earthfile: Who Benefits In The Business Of Genetically Modified Crops 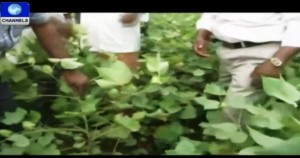 Some farmers, however, say with the decrease in their yields and loss of choice on what they can plant in their farms, it is the worst thing that has ever happened to them.

Meanwhile, leading world scientists say much more research is needed to prove whether GM crops offer any benefit and not harm human health and the environment.

For 18 years, GMOs have proliferated across the globe and it now represents 12 percent of the world’s total crop area.

In recent time, the Nigerian government has welcomed some investors in the agric business that activists in the country would rather not see here. Their reason is that these investors deal in GM foods.

Over 75% of proprietary seeds are owned by 10 companies. These seeds include designer GM seeds as well as non-GM seeds that are considered intellectual property of a company.

The reality is some places, including the European Union and China, are becoming increasingly restrictive of genetically modified imports.

Considering the nature of this industry, the need to protect local farmers, the food in circulation and the environment is becoming more important. So here’s hoping that the Boisafety law would consider the interest of all rather than the chosen few.