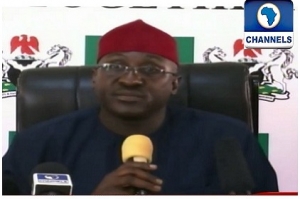 The Nigerian government has confirmed Sunday’s attack on three villages near Chibok in Borno State, where over 200 girls were abducted from their dormitory at the Government Girls Secondary School on April 14.

The coordinator of the National Information Centre, Mr Mike Omeri, said the villages were Kautikeri, Kwada and Birnjuzu, 10 kilometres from Chibok, believed to have been attacked by suspected members of the Boko Haram sect.

According to Mr Omeri, the government is yet to ascertain the extent of damages and casualties’ figures.

Meanwhile, when asked why the insurgents seem to be having their ways in the region, Mr Omeri and the police spokesman, Mr Frank Mba, said the security operatives were guided by laws.

Personnel of the Nigerian Armed Forces have been on counter terrorism operation in the region with three of its states under emergency rule.

There have, however, been calls for the military to do more and end the insurgency that began since 2009 in the region by a terrorist group, Boko Haram. The group is demanding for an Islamic state and an end to western education.

Earlier reports say at least 10 persons were killed in the attacks on the three villages by suspected members of the Boko Haram.

Suspected members of the sect were said to have invaded churches in Kautikari village with bombs and guns while the victims were holding services.

Desperate residents had to send out text message, calling for help from security operatives and the government.

Members of the Boko Haram have carried out series of attacks on churches, schools and villages in the northeast.

The gunmen suspected to be Fulani herdsmen are reported to have struck the two communities in the area in the late hours of Saturday.

Chairman of the local government, Emmanuel Adamu, confirmed the killings to Channels Television. He said the gunmen came in through the thick forest between Sanga and Plateau State.

He appealed to the government to carry out an air survelience in the area to fish out the terrorist.

The girls are still in their custody, but the government has continued to assure Nigeria’s that the girls would be rescued.