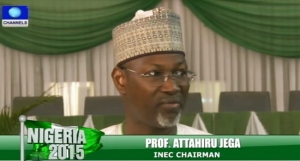 The Chairman of the Independent National Electoral Commission, Professor Attahiru Jega, has expressed gratitude to Nigerians for their peaceful conduct during the presidential elections on Saturday, March 28.

The INEC boss, in an interview with Channels Television on Saturday night, expressed gratitude to the Almighty for how peaceful the process has been and for the large turnout of Nigerians who showed patience in the face of frustrations.

“Of course, man proposes and God disposes. We thought that this would be near perfect but regrettably there have been challenges,” he said.

“There were still cases of late distribution of materials and late arrivals in polling units but in spite of this we think its been very good also.

“We cannot but thank Nigerians for the passion they have shown, and the commitment to be able to vote in this general elections.”

Professor Jega was particularly happy about the exercise in the north-east region of the country where there had been fears of insecurity.

He also explained that elections which failed to hold on Saturday will only be conducted in 13 federal constituencies and that will be on April 11.

He explained that the polls would have to be moved to that date as a result of shortage of electoral materials.

The INEC boss, however, looked on the bright side when he compared the situation with what obtained in 2011.

“Federal constituencies alone we rescheduled over 60 and then we also rescheduled some senatorial because of shortages of materials,” he recalled.

Nevertheless, he expressed regret over the challenges faced. He stated that lessons have been learnt, which would be factored into preparations for the governorship and State Assembly elections holding on April 11.

Professor Jega admitted that there were indeed challenges in the deployment of the card readers but the challenges were not significant enough to affect the overall success of the elections.

“From our general assessment, out of the 150,000 card readers which we have deployed, only about 450 were affected.

“But because we just wanted to ensure that Nigerians who have been patient in this process have an opportunity to exercise their rights and because the numbers are relatively insignificant, that’s why we thought it was necessary to do an addendum to the guidelines and allow those people to be able to vote once they can be physically authenticated and verified.

“Thank God it went well. The only challenge is that it meant the voting has gone on in some places into late evening and early night.”

He expressed confidence in the assurance given by security agencies that all arrangements had been made to secure all the polling units and ensure the successful completion of voting as well as a successful collation of the results.