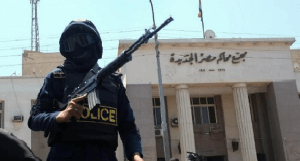 Islamist militants hit Egypt’s two largest cities on Sunday with a bombing in Cairo and an attack on a church in Alexandria, leaving one policeman dead and seven people wounded, security sources said.

In a separate incident, the leader of a militant group that has targeted police and soldiers around the capital was killed in a fire-fight with security forces early on Sunday, the interior ministry said.

Egypt is facing an insurgency based in North Sinai that has killed hundreds of soldiers and police since the army toppled Islamist president, Mohamed Mursi, in 2013 following mass protests against his rule.

Most militant attacks have taken place in the Sinai Peninsula, a remote but strategic region bordering Gaza, Israel and the Suez Canal. Smaller-scale bombings have become increasingly common in Cairo and other cities.

A bomb explosion on a bridge leading to the upscale Cairo district of Zamalek, which hosts many embassies, killed one policeman, the interior ministry said. Two more officers and a civilian were injured.

According to the Interior Ministry and Security sources, the policeman was shot dead during an exchange of fire at an apartment in Giza, near Cairo.

The force of the bomb, which the sources said was planted in or near a car, injured several more people on the May15 Bridge.

On Saturday, two bombs exploded near a police station in the residential Imbaba district across the Nile River from Zamalek, causing no casualties.