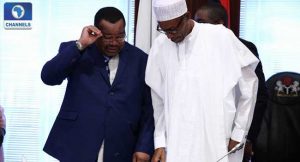 President Muhammadu Buhari says Nigeria will fulfill its obligations to the ECOWAS Bank for Investment and Development (EBID).

The President made the pledged despite the nation’s economic downturn caused largely by fallen prices of oil in the international market.

He said on Monday when he received the President of EBID, Mr Bashir Mamma, at the State House in Abuja, Nigeria’s capital: “We may be limping because of fallen oil prices, but we will fulfill our commitments to the bank.

“We may have fallen behind, but we will live up very soon.

“We will maintain the objectives of setting up the bank, which is to help our less financially endowed neighbours,” President Buhari said.

On his part, Mr Mamma disclosed that EBID is the financing arm of ECOWAS.

He said the ECOWAS bank has been existing for about 30 years and was initially set up as a fund, “to help less developed West African states, but we now cover all parts of the sub-region”.

The EBID President added that the bank set up Ecobank and has also established an airline, after the national airlines of most member countries collapsed.