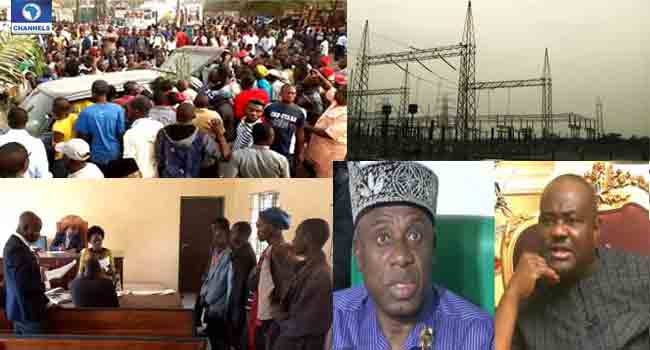 Nigerians kick-started the year in high spirits despite the hardship faced in the final weeks of 2017, no thanks to the fuel crisis. Joining millions of people around the world, the year 2018 was welcomed with fireworks in various part of the country. Many, especially in major cities, gathered at fun spots from where they ushered in 2018.

President Muhammadu Buhari in his New Year address raised hopes as he promised to stop those behind ‘collective blackmail’ of Nigerians and said he is determined to get to the root of the fuel scarcity in the country. He also promised renewed and increased focus on infrastructure, revealing plans for a better railroad transportation nationwide. In the New Year message, President Buhari also assured Nigerians that the government “is slowly stabilising the economy” and that Nigeria will stop rice imports this year, insisting that restructuring is not Nigeria’s priority.

New Year tragedy, however erupted in Calabar, Cross River State capital as fire destroyed Marian market affecting many shops and leaving many of the traders distraught. The tragedy spread like wildfire to Kaduna State as some gunmen unleashed mayhem killing the traditional ruler of Numana Chiefdom in Sanga Local Government Area of the state, Gambo Makama and his pregnant wife.

Mixed reactions trail President Muhammadu Buhari’s New Year message as the main opposition Peoples Democratic Party (PDP) describes it is depressing and full of false claims. Former Minister of Education, Obiageli Ezekwesili in her reaction said the President should not lament about oil marketers but rather own up to the failure of the Petroleum sector. Ekiti State Governor Ayo Fayose asked the President to stop the blame game and take charge.

The New Year killings left the country in utter shock as the ruling All Progressives Congress (APC) was quick to condemn the killings, describing it is gruesome and barbaric calling on relevant security agencies to embark on a full investigation.

Governor Nasir El-Rufai condemned the murder of the traditional ruler in Numana Chiefdom, calling for immediate investigation. Governor Nysom Wike in his reaction promised to reward anyone who can identify the perpetrators of the new Year attack in Rivers State with the sum of N200 million. Govennor Abdulfatah Ahmed of Kwara State in his reaction condemned the attack in Ilorin, describing it as criminal and ordered the police to launch manhunt to nab the perpetrators.

The New Year tragedies took a shocking turn when the leader of the terrorists group Boko Haram, Abubakar Shekau released a video message on Tuesday claiming a series of attacks in northeast Nigeria during the festive season. A pregnant woman and five others were killed in Guma and Logo Local Government Area of Benue State by suspected herdsmen. The death toll later increased leaving at least, 20 people dead.

WAR OF WORDS OVER RIVERS KILLINGS:

Following the New Year tragedy that occurred in Rivers State, the Minister of Transportation, Rotimi Amaechi and Governor Nyesom Wike were engaged in war of words. Amaechi blamed Wike over the attack accusing him of encouraging thugs and failing to safeguard the lives of the people of his state saying he should resign. The Rivers State Government however defended the Governor saying Amaechi’s statement is false and an attempt to gain political mileage from the killings.

There was a sudden loss of power generation on Tuesday night, leading to a total blackout across the country. The Ministry Of Power, Works and Housing said the power outage occurred following a reported fire incident on a gas pipeline in Edo State leaving the country in total blackout.

Buhari in reaction to the killings described it as unacceptable and commiserated with the families of the victims. He then directed law enforcement agencies to intensify efforts.

Due to the killings, protest erupted in Benue State as hundreds of youths on Wednesday stormed the popular Food Basket Roundabout in Makurdi lamenting over death of residents numbering 33 in the attacks carried out by suspected herdsmen. Governor Ortom in reaction expressed great worry over the incessant killings and called for more proactive measures to tackle the incessant killings.

Benue residents had cause to heave a sigh of relieve as Police in the state arraigned six herdsmen allegedly involved in the killing of 19 farmers in Akor village of Guma Local Government Area of Benue State. The case which was heard at Chief Magistrate Court 1 in Makurdi was then adjourned to February 2018 for further hearing.

The week was all smiles as President Muhammadu Buhari on Saturday inaugurated 10 additional locomotives and two coaches in Rigasa Train Station in Kaduna State. The President also took a train ride alongside Kaduna State governor Nasir El-Rufai and Minister of Transportation, Rotimi Amaechi.

EL-RUFAI AND BEN MURRAY-BRUCE IN WAR OF WORDS:

COVID-19 Protocols: 33 Things Travellers Must Know Before Arriving In Nigeria