‘These Killings Must Stop!’ Osun CAN Protest Killings, Attacks In Northeast, Benue 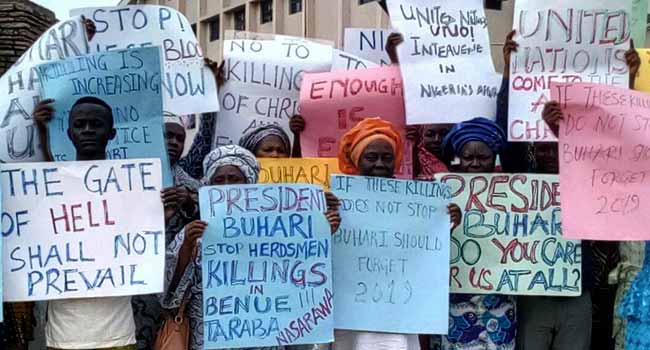 Christians in Osun State on Sunday occupied the streets of Osogbo, the state capital in protest.

Members of the Union Baptist Church and Christian Association of Nigeria (CAN) said the protest was against incessant killings in the Northeast and the frequent attacks by suspected herdsmen in other parts of the country.

They lamented over incessant killings, attacks and abduction of innocent Nigerians by gunmen and called on the Federal Government to intervene.

The Chairman of Nigeria Baptist Convention, Reverend Olumide Kehinde told journalists that Nigerians voted for the present administration and it is the duty of the government to protect its citizens.

“The church has been proactive for long, believing that these killings will stop. But this time, we are taking the battle to the enemies gate. The President who God has given the mandate to rule Nigeria must see to it that all of these killings stop,” he said.

Reverend Kehinde during the protest also asked Christians to defend themselves against any form of attack noting that Christians are left with no choice but to protect themselves.

Reopen Churches For God’s Sake, CAN Tells Lagos, Ogun, Others