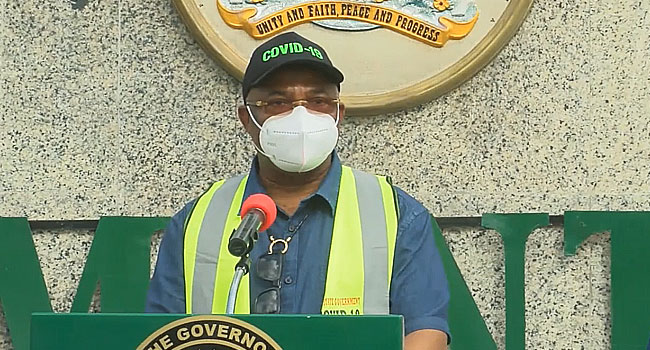 The Governor of Imo State, Hope Uzodimma, has applauded President Muhammadu Buhari on the appointment of new service chiefs in the country.

According to a statement by the Governor, President Buhari’s actions have shown that he is a responsive leader who listens to the yearnings of the people.

While congratulating the newly appointed Service Chiefs, Governor Uzodimma urged them to live up to the expectations of their new portfolios.

Meanwhile, his counterpart in Rivers State, Governor Nyesom Wike has warned the new service chiefs against politicising the state of security by making alliances.

Wike made this known in a statement by the Commissioner for Information, Paulinus Nsirim, saying the President deserves commendation for finally listening to the voice of the people.

The appointment of the new Service Chiefs follows the resignation of the former officers.

Imo State Governor, Hope Uzodimma has pledged to improve the welfare of workers, assuring them of better days.

The governor stated this on Friday during his Christmas message to residents of the state.

He said his administration is committed to improving the welfare of the workers and the development of the state.

The Governor while delivering his Christmas message at the Holy Trinity Catholic Church Omuma in Oru East Local Government Area, congratulated the Christians on the celebration of the birth of Jesus Christ while emphasizing that the welfare of Imo indigenes and the development Of the state remains a top priority for his administration. The Imo State government has promised to strengthen efforts towards protecting its people from the COVID-19.

Governor, Hope Uzodinma made the commitment while addressing journalists in Owerri on Friday after noting that the state had recorded an additional four cases of the COVID-19.

He expressed his displeasure over the fact that despite the ban on interstate travels and the directives issued on movement to curb the spread of the virus, there was still a lot of non-compliance.

According to the governor, the four cases are all members of the same family who were infected by one of them who recently returned from Lagos.

“There is now need for us to strengthen efforts towards protecting our people at the villages. Despite the announcements and directives to close all borders, it is surprising that somebody came in from Lagos and has infected four members of his family,” he said.

This now brings the total number of cases in the state to seven.

Meanwhile, speaking further, governor Uzodimma directed indigenes with bodies of relatives at mortuaries across the state to go ahead and bury them.

He, however, noted that there should be no elaborate celebrations in strict compliance with government’s rules.