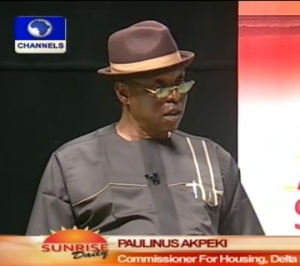 The Delta State Commissioner for Housing, Paulinus Akpeki, believes that the level of development in their region of the old Bendel State and the ethnic harmony that now existed have justified the creation of Delta State.

Mr Akpeki was speaking on the Friday edition of Channels Television’s Sunrise Daily, where discussions bordered on the celebration of the 23rd anniversary of the creation of Delta State.

Speaking on the rationale behind the creation of the State, he recalled that there had been a high level of discontentment and complaints of marginalization from different ethnic groups in the old Bendel State.

He explained that if Delta State had not been created, a number of the rural areas would not have experienced the level of development they have. He said that while a lot of people feel that the Delta State capital, Asaba, was the main city in the state, Delta actually has about 23 good cities which were in the past marginalized.

He spoke about the transformation that the state had experienced since its creation in different sectors ranging from road construction, to healthcare, education, commerce and other areas of the economy. He cited towns like Warri and Ugheli as having experienced remarkable transformation.

With the ability of the Governor to easily identify and address all projects going on the state, “the government has been able to instil that trust in the people”, he said, adding that the State Governor has particularly focused on preaching peace and love among the people as a major ingredient for development.

With the creation of Delta State, Akpeki believes the idea of creating more states as recommended by the National Conference was justified, and their recommendation of Anioma State to be created from the current Delta was driven by the need for further development rather than ethnic differences. However, he said that development was not just about creating more states but restructuring governance and distribution of funds.

Akpeki was part of the constitutional conference in the past and he said that a 2-tier government made of the federal and state would have been better for Nigeria because Local Governments are not able to do what is expected of them.

He was, however, reluctant to suggest the 2-tier government for the current Nigeria.

On youth development, Akpeki, who was the youngest member of the House of Representatives in the old Bendel during the second republic, said that the Government of Delta State has also set good examples by giving ample space to the youths to excel, not just academically but also by being part of government.