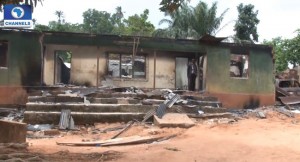 The Governor urged the Chairman of the Commission, retired Justice Chukwuma Eneh, alongside other members to, among other things, ascertain the exact number of deaths in the incident, ascertain the role of the security agencies as well as recommend to the state government appropriate security measures to permanently avert clashes between communities and herdsmen.

The governor said that, among other things, the mandate of the Commission, includes finding out the remote and immediate circumstances that led to the attack, ascertaining the role of security agencies before and after the attack, ascertaining the actual number of deaths in the deadly attack as well as making recommendations on appropriate security measures that will prevent future occurrence.

The members of the commission are drawn from various backgrounds including legal, security, medical and the civil society.

The Chairman, a retired justice of the Supreme Court, promised the governor that they will not betray the confidence reposed in them.

Monday, April 25, 2016 at Nimbo Community in Uzo-Uwani Local Government Area of Enugu State was a day of pain and sorrow as suspected Fulani herdsmen invaded the town in the early hours of the morning.

The Inspector general of police, Mr. Solomon Arase visited and condemned the attack and assured of tracking the perpetrators down.