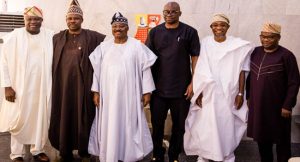 Governors in the South West Region of Nigeria have joined forces to tackle socio-economic problems confronting the six states and militating against development even as they tackle recession by leveraging on comparative advantages in the zone.

Hosted by the Oyo State Governor, Abiola Ajimobi, other governors of Lagos, Ogun, Ekiti, Osun and Ondo States came together for the first time without recourse to political or ideological differences.

In his address of welcome, Governor Ajimobi, hinted that they intended to come out of the forum with a new pedestal hinged on regional integration as a tool for fighting low economic competitiveness, food and social insecurity despite political affiliations.

Just before deliberations began at the Exco Chambers of the Governor’s Office, he stated clearly that the South West Region was confronted with so much problems that they could no longer act individually but collectively with a common purpose of improving the living standard of the people in a sustainable environment.

At the end of the closed door session, the Ekiti State Governor, Mr Ayodele Fayose, said the six governors had agreed to work as one family despite belonging to different political parties.

In his response, Governor Ibikunle Amosun of Ogun State said the meeting also resolved to leverage on the viability of Lagos to push development in south west.

Governor Ajimobi also called for a collective common policy among the south west governors that would ensure the region was given its rightful place as the economic basket and infrastructure reference point of the country.

Other governors at the meeting were that of Lagos State Mr Akinwumi Ambode, Osun State, Mr Rauf Aregbesola and Governor Dr Olusegun Mimiko of Ondo State who was represented by the Secretary to Ondo State Government Dr Rotimi Adelola.

Governor Mimiko was absent because of a meeting scheduled with President Muhammadu Buhari.