Man Dies After Jumping Off A Mast In Ibadan 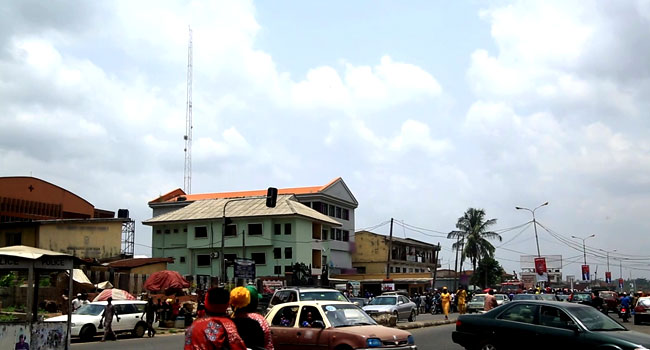 A young man simply identified as Sola has committed suicide in Ibadan, the Oyo State capital.

Sola was said to have killed himself on Saturday morning after he climbed and jumped down from the peak of a mast belonging to a commercial bank at Sango area in Ibadan.

An eyewitness told Channels Television at the scene of the incident that the victim who appeared to be deeply troubled was seen naked before the tragedy.

According to her, Sola had made an attempt to climb a fence near some shops in the area but was prevented by the traders.

He was said to have taken another route through the bank’s premises where he gained access to the mast.

She explained that the victim climbed to the top of the mast and was shouting that he wanted to die before he eventually jumped.

In his reaction, the father of the victim who was accompanied by the mother described the incident as shocking and unbelievable.

The father refused to disclose his name but narrated that Sola had gone to church with his mother on Friday night and returned early on Saturday without any noticeable problem.

He said neither the victim’s mum nor himself knew when Sola left the house, only for them to be alerted by neighbours who saw him stripping himself on the road just before the incident.

The Oyo State Police Command confirmed the incident to Channels Television shortly after it occurred.

The Police Public Relations Officer, Olugbenga Fadeyi, disclosed that the man was confirmed dead at the University Teaching Hospital, Ibadan.

He said the victim was able to gain access to the bank’s premises as the security operatives on duty mistook him for a beggar requesting money from ATM users.

Mr Fadeyi added that Sola fell on the roof of the bank and was rescued but was certified dead at the hospital as he bled through the mouth.

He added that his body has been moved to the morgue but the victim’s relatives have yet to claim it.

COVID-19 Is A Controllable Pandemic – WHO