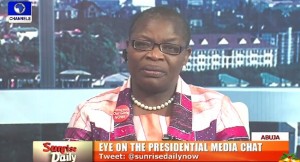 The Bring Back Our Girls campaigners are asking the government and Nigerians to improve the welfare of the Nigerian military.

The group made the demand on Sunday when they gathered in Abuja at a special sit out to honour departed Lieutenant Colonel Abul Ali and other fallen heroes.

It maintained that only a well-motivated force could subdue the Boko Haram terrorists that have pushed for the establishment of an Islamic State and an end to Western education in the north-eastern region for over six years.

While praising the courage of the late army Colonel, they also called on Nigerians to show love to the families of military personnel, as a mark of appreciation for their supreme sacrifices.

A leader of the group, Oby Ezekwesili, further charged the military authorities to step up intelligence gathering in the fight against insurgency as well as be accountable to the Nigerian people.

“Just looking at the duty allowances and bonus that they get, the way that they’re honoured and the prestige with which they are treated as those who are executing that war at the battle front, more support would make a big difference.

“In many ways, the psyche of our military needs to be so overhauled towards a sense that the society and the government are with them and that they are not left to their own fate. I think that it is important that we, not just we as BBOG, but all of us in the country, have to put a voice out there. We must demand accountability from our military.

“The military establishment must be subject to the demand of accountability and we never cease doing that. That is one thing.

“The other thing is the soldiers at the frontline of battle deserves our support. They deserve our encouragement and gratitude. All other countries around the world have these seasons when they specially show appreciation to their soldiers. We cannot make it a one off event. It has to be something that is constant and we hope that spirit will see an expression in the motivation of our soldiers to even do more,” she told the gathering.

Another member of the group, Aisha Yesufu, also stressed the need for Nigerians to show soldiers in the frontline that they are with them and would continue to protect them and look after their families.

“We are calling on, not only the Nigerian government, but individuals for us to adopt families of soldiers that are at the front.

“That is the thing that we are talking about today,” she added.

Lieutenant Colonel Ali was killed in gun battle with members of the Boko Haram sect few days ago alongside some other soldiers.