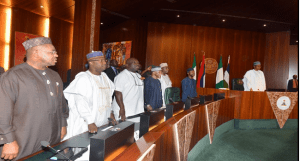 The meeting between President Muhammadu Buhari, Vice President Yemi Osinbajo and the 36 state governors on how to offset over 100 billion Naira salaries of Nigerian workers ended without an offer of a bailout plan by the Federal Government to the States.

At the end of the meeting held on Tuesday, the Governors were only able to reach an agreement that the Federal Government should pay debts it owed the states over jobs they executed.

Zamfara State Governor and chairman of the Governors Forum, Abdullaziz Yari, who briefed reporters after the meeting, said that instead of a bailout, the state governments were told to look inwards and generate needed funds to clear their debts.

Poor Management Of The Economy

The State Governors also requested that the Nigerian Liquefied Gas Company’s tax should be paid into the Federation Account and be shared.

They also asked the Federal Government to ensure that monies accruing from the Federation Account should be shared, as stipulated by the constitution.

It is the first time the President will be meeting with the Governors to find a solution to the financial crisis that has made no fewer than 22 of the states owe salaries to their workers to the tune of 100 billion Naira (about $5,000,000).

The Nigerian Governors, whose lot has always been to come to Abuja to share in the Federation Account, through their chairman said they were pleased to meet with the President but that it was beyond a bailout as reported.

After a meeting of the All Progressives Congress Governors Forum last week, the chairman of the forum, Governor Rochas Okorocha, called for a bailout for states which have been unable to pay workers’ salaries.

He said that the current situation was a product of poor management of the economy.

“On the economy of the nation, we are concerned and worried by the dwindling revenue of the states which today has affected negatively, the lives of our people.

“The matter has become so serious that urgent action must be taken for a bailout for the states, as things are not getting better either.

“We have sat down to review steps that should be taken and we are calling for total overhaul of the system to block all the leakages in our nation’s economy,” Governor Okorcha said.

Other issues in the front burner include how to curb insurgency in Bornu, Yobe and Adamawa states and what the president is doing in collaboration with the international community.

The Governors also expressed concerns over the decision to dismantle military check points, stressing that it was not the right time for such decision.